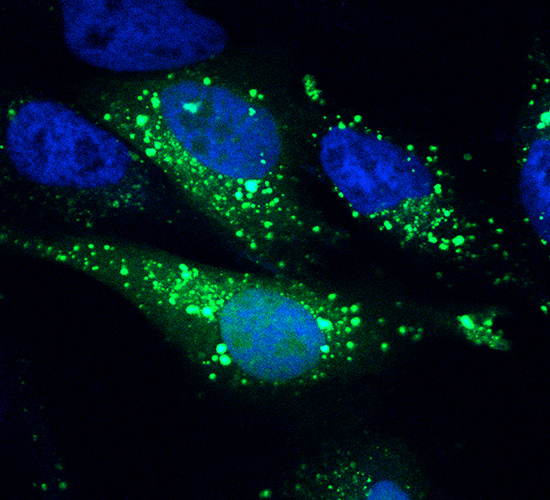 autophagy: cellular process associated with the development of chronic diseases

Scientists from various national and international institutions described a new mechanism to control the degradation of intracellular components through "Autophagia”. This cellular process participates in the genesis and development of obesity, cancer, Diseases Cardiovascular, among others.

Through the multidisciplinary work of several lines of research of the Advanced Center for Chronic Diseases (ACCDIS), together with other national and international institutions such as: University of Chile, Pontificia Universidad Católica de Chile, KU Leuven University, Houston Methodist Research Institute, Weill Cornell Medical College and UT Southwestern Medical Center described a new actor to activate the autophagy or "cellular self-digestion". The work published in the journal "Autophagy” under the title: “PKD2/polycystin-2 induces autophagy by forming a complex with BECN1" sample that the ion channel called "Polycystin 2" interacts directly with "Beclin 1", master regulator of autophagy.

Dr. Alfredo Criollo, scholar of the Research Institute of Dental Sciences (ICOD), Faculty of dentistry, University of Chile, ACCDIS research associate and leader of scientific work, explained that "autophagy" is a concept that expanded between the decades of the '80s-'90s and its meaning has been changing over the course of the last few years, "autophagy was previously thought, it was a cellular self-destruction system, but in fact already in the 90s various studies showed that this cellular self-digestion was beneficial to eliminate or recycle defective or unnecessary intracellular components". Thus we learned that autophagy is activated in the face of various conditions of cellular stress, allowing cells to adapt to unfavorable situations.

The study of this cellular process has allowed to explain the origin of obesity, cancer, Alzheimer's disease, Parkinson, etc. It has also allowed the recognition of three Nobel prizes, due to scientific advances in the study of autophagy.

Autophagy and its relationship to obesity

A malfunction of the autophagy can generate the Obesity, causing 2,8 million deaths in the world and in Chile - according to data from the Ministry of Health- represents one deceased per hour.

Dr Eugenia Morselli, associate professor and researcher of the Department of Physiology of the Faculty of Biological Sciences of the PUC explained, "it has been observed that when autophagy is dysfunctional in certain neurons of the hypothalamus, region of the brain involved in regulating intake, specifically altering the desire to eat and favoring food intake".

This study allows us to understand the regulatory mechanisms of autophagy and develop pharmacological strategies that modulate this cellular process and obesity.. Recently Dr. Morselli won the Award of Scientific Excellence to Young Researcher "Adelina Gutiérrez" category Natural Sciences, awarded by the Chilean Academy of Sciences.

challenge: how to control the autophagy

On the other hand, Dr. Daniel Peña, ANID/ACCDIS postdoctoral staff and first author of the study, stressed that for autophagy to be activated the protein "Beclin 1" must be in a precise place and time inside the cell. To make it happen, the ion channel "Polycystin 2" must interact with Beclin 1 to form a "protein complex", exemplifying that these two elements are "new friends" within the autophagy mechanism. The next goal will be to identify more of these interactions to activate or decrease autophagy when necessary.