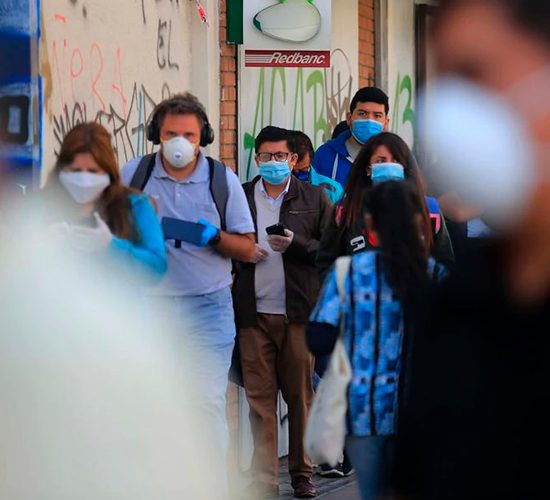 Last Thursday, in a new daily report by the Ministry of Health on the situation of the coronavirus pandemic in Chile, authorities reported 1,575 new cases of COVID-19, of which, 1,104 are symptomatic and 440 asymptomatic people. Like this, the total number of people diagnosed with COVID-19 in the country reaches 476.016 of which, 14,139 are active. As for the deaths, according to information provided by the Department of Health Statistics and Information (Give), in the last day there were 77, bringing the total death figure associated with COVID-19, amounts to 13,167 in the country.

This balance was attended by the First Lady, Cecilia Morel, and the director of Senama, Octavian Vergara, who released a new announcement regarding older adults. What was the announcement? That from next Monday, October 12, Senior Long Stay Establishments (ELEAM) who are in Step 2 or Transition Forward, will be able to receive visits twice a week and with a maximum of two people per resident with a health passport. In addition, older adults will be able to go for a walk for two hours.

On the other hand, undersecretary of Healthcare Networks, Arturo Zúñiga, detailed that 812 people are hospitalized in intensive care units, of which 610 are with mechanical ventilation support and 99 in critical condition. In relation to the Integrated Health Network, they reported that a total of 414 fans are available. As for the Laboratory Network yesterday, the results of 32,954 PCR tests were reported, reaching a total of 3,581,727, country level.

At the same time, on a new day of assessment of restrictive measures for the national territory, there were several announcements that were reported by the Undersecretary of Crime Prevention, Katherine Martorell. Advance to Transition, from Tuesday, October 13 at 5am; Viña del Mar and Valparaiso in Valparaiso; Licantén and San Clemente in the Maule; Hualqui commune in the Biobio Region; Lonquimay in the Region of La Araucanía; and in the Lakes Region the commune of Maullín. It was also reported that they are advancing to Preparation, i.e., Phase 3, Quillota communes in the Valparaiso and Linares region in the Maule Region.

But there were also setbacks. From Saturday they return to Phase 2, i.e., quarantined on weekends: In the Biobío Region the commune of Cañeta and in La Araucanía the communes of Collipulli and Pucón. Thus also, go back to quarantine from Saturday: the communes of Fresia and Los Mcincermos in the Los Lagos Region.

But there were also other announcements, focused on the coming plebiscite of October 25. By the day of the plebiscite all communes in Quarantine or Transition, they're going to stay at that stage. To facilitate voting, during table opening hours, people will be able to move around with their ID card.

It should be remembered that, facing the long weekend ahead, from this Friday, October 9th at 6:18 a.m..00 HRS. and until Monday 12 at 00.00 HRS. health cordons will be established in the Great Valparaiso, Great Conception, Temuco, Father of Las Casas and the Metropolitan Region.

9th ICOVID CHILE Report: Worrying situation in the far north and south regions of the country

This new report notes that the national rate of contagion, i.e., the number of infected per 100,000, stays at 8,1. This figure is 8 times higher than the number proposed to be safe in deconfining. The regions with the highest burden of new cases are Arica and Parinacota, The Lakes, Aysén and Magellan. While the lowest burdens of new cases are in the Metropolitan Region and Coquimbo.

Also, this new study accounted for a worsening in traceability figures during the Festivities, where there were decreases in early consultation and test indicators carried out during these dates.

In this sense, the U's engineer and academic. of Chile, Marcelo Olivares, explained that while there are indicators at the national level that are still stable, other aspects still need to be strengthened and improvements to the traceability system continue to be pushed to avoid a regrowndo as quarantines are lifted.

"The infectious load is still high and caution should be exercised. National average indices do not reflect the disparate situation in some regions where transmission is increasing (The Lakes and Valparaiso) and where hospital capacity is reaching critical thresholds (Biobío and O'Higgins)”, Warned. "Continued push to improve the traceability system and maintain precautionary measures to avoid a regrowthe as quarantines are lifted", raised Olivares.

On the other hand, epidemiologist and academic at the Pontifical Catholic University of Chile, Catterina Ferreccio, who also serves on the Government's COVID-19 Advisory Council, assured that, according to the data evidenced by the latest ICOVID report, the burden of the disease remains worrying at the national level.

"While MRI has achieved some stability in new daily cases,, in recent days the rate of reproduction of the epidemic is about 1, which could impact the number of cases in the coming weeks", Ferreccio said. "The most worrying thing is the increases in the northern and southern extreme regions of the country, as well as increases in infection rate and burden in Los Lagos. It also requires attention to the large increase in cash R in Valparaiso, where there could be an increase in cases in the coming days", explained the member of the COVID-19 Advisory Council.

At the same time, and by way of conclusion, the researcher in population dynamics and academic of the Pontifical Catholic University of Chile, Mauricio Lima, concluded that the key word for defining chile's epidemic overview is containment.

"For almost two months, the burden of infected nationally has continued to fluctuate at the threshold of 10 new cases per day per 100,000 inhabitants and with transmission values (R cash) close to 1. After the growth and expansion experienced between May and July, these two months reflect how complicated it has been to contain the epidemic", emphasized the expert of the Catholic University.

On the other hand, the ICOVID report also refers to the hospital capacity of the integrated care system at the national level, indicating an occupancy level of 77% of critical beds. This indicator has remained stable in the range 75-80% over the past few weeks. Fraction of ICU beds occupied by COVID-19 patients borders between 60-65%, figure that while it's high, has declined considerably from July to date. Weekly variation in hospitalizations remains stable, growth at the national level.

However, the report states that this figure, "added nationally, doesn't account for the critical situation in some regions". In particular,, because it is observed that in the Biobío Region the capacity is 87%, 65% of beds occupied by COVID-19 patients. The O'Higgins Region also has high levels of use, with a sustained increase over the past few weeks. This, combined with the high rate of transmission (R>1) and the burden of infections from these regions, "gives an alert that the system is under stress and will continue to do so to the extent that transmission of the virus is not controlled", ends the document.