A global problem: Advances in the research of chronic non-communicable diseases 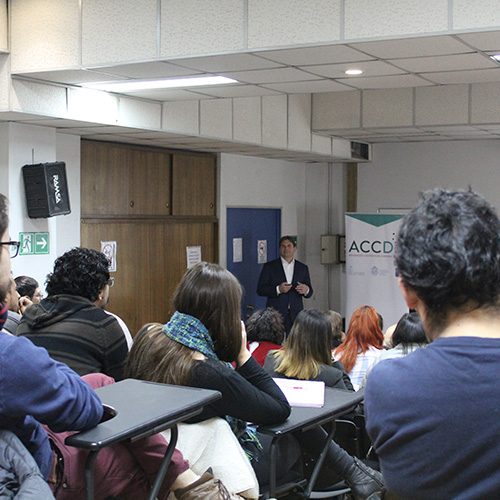 Within the framework of the cycle of seminars of the Center for advanced chronic diseases (ACCDiS ), and with the collaboration of the University of Groningen, the University of Chile received the visit of the Dutch investigator Daan Westenbrinck, who gave a lecture where he addressed the implications of disorders such as obesity and diabetes, whom, said, “have become a cause of important death in people under 60 years of age so that early detection and early treatment of these pathologies is priority”.

The noncommunicable diseases, such as diabetes and obesity, and in particular cardiovascular disorders, have become in a critical global health issue and which has increased their numbers dramatically in recent years.

In this context, Inserts the visit of the researcher of the University of Groningen, Daan Westenbrinck, who issued the Conference""Mitochondrial Control of Physiological and Pathological Remodeling", within the framework of the cycle of seminars of the Center for advanced chronic diseases (ACCDiS ).

The Dutch researcher He is a specialist in cardiovascular disease research and the functions of mitochondrial and cardiac remodeling, issues that have led him to collaborating steadily with Chilean researchers in this matter.

Part of this Conference addressed the implications of disorders such as obesity and diabetes in the development of cardiovascular disease, which according to what you said Westenbrinck "have become a cause of important death in people under 60 years of age so that early detection and early treatment of these pathologies is a priority"”.

For this reason, detailed, “advances in the clinical research between two universities in very good record in this matter are fundamental in the development of new techniques and generating knowledge that can improve the quality of life of patients".

Also, highlighted the social impact of these pathologies, pointing out that an easy solution on how there is they might affect the population in the future. Westenbrinck pointed out that these diseases are long-term, slow progression, and still There are no effective cures for the same, so it is key to awareness that people develop habits and patterns that have an impact on the development and complications associated with diabetes and childhood obesity.

For the ACCDiS, heart failure research is a strategic issue, given that at present, “the coexistence of several factors of cardiovascular risk - obesity, diabetes mellitus, high cholesterol, sedentary lifestyle, smoking and high blood pressure, they have led to the emergence of new pathologies, so it must be in full harmony with the present and future challenges of the cardiovascular area”, said Sergio Lavandero, Director of the ACCDiS.

In July of 2018 the Chile and Groningen universities signed an agreement for the creation of the joint doctoral program in Biomedical Sciences, which has allowed that a collaboration that has been developing for years was strengthened through the establishment of a programme for the training of future researchers and academics who contribute in these areas.

In this context, Dr. Mario Chiong, research associate ACCDIS, He stressed the cooperation of long standing that has developed this Center with the University of Groningen, In addition to what this joint graduation pathway: "as part of that work we have a PhD student, Pablo Sanchez, who will be the first to carry out the joint programme, elaborating his thesis for two years in Chile and subsequently it will be two years of thesis at the University of Groningen. We hope that he will be the first of a series of students carrying out this joint programme”.

At the same time, Richard Weber, Director of the Department of graduate and postgraduate, He stressed that the specialization in international cooperation becomes increasingly important, in particular in relation to the strengthening of programs of doctorate and the generation of knowledge and research associated with them.

By the same, Weber said the event of Matchmaking academic being held in September at the University of Groningen, which will count with the participation of scholars and academics from the Faculty of medicine, of ACCDiS, Gerociencia Center, Mental Health and metabolism (GERO) and other units of the University of Chile, which will allow the strengthening of postgraduate research space and its programs.