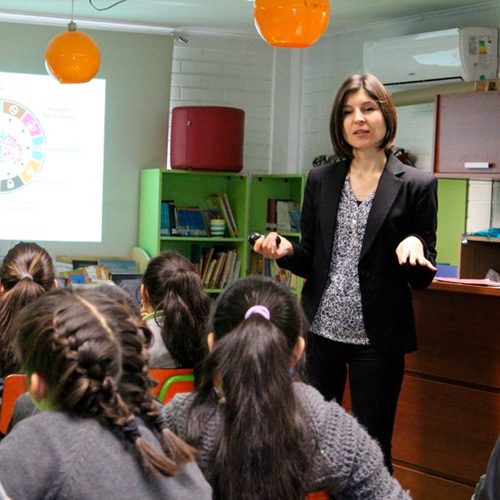 The 5th basic students of the Santa Victoria School in Huechuraba, participated in the Scientific Chocolatada offered by Dr.. Jenny Ruedlinger, ACCDiS Advanced Center for Chronic Diseases researcher, who shared his knowledge and talked about "The hidden power of your plate: food and cancer prevention".

La Chocolatada Científica is an activity that is part of the regional association project (PAIR) Explora Norte Metropolitan Region and consists of a scientist's visit to the educational establishment, who interacts with students and shares their knowledge in a simple way, accompanied by a cup of hot chocolate.

The Dra. Ruedlinger is a veterinary doctor, University of Talca and Dr.. in Cell and Molecular Biology at the University of La Frontera. Research is currently underway into the association between the consumption of processed meats, chronic inflammation and cancer, a theme that lies in the palestra, given that 2015, World Health Organization (WHO) Based on a statement from the International Centre for Research on Cancer – he said that the consumption of processed meats (Sausages, Ham, Sausages, etc.) is linked to the development of colorectal cancer and it is highly possible that red meat consumption also causes cancer.

In 2015 the World Health Organization (WHO) based on a statement from the International Center for Research on Cancer (Iarc), states that the consumption of processed meats - sausages, Ham, Sausages, etc.- is linked to the development of colorectal cancer.

These statements have come into controversy following the recent publication in the “Annals of Internal Medicine”, where they recommend that adults should continue to consume processed meats or red meat given the low evidence of their carcinogenic potential. This fact has been debated by the scientific community of prestigious universities, is an example of a statement made by the Harvard University, explain the reasons why such recommendations are considered irresponsible.

In the context of the Scientific Chocolatada, the Dra. explained to children not only about processed meats, but also about processed foods in general, teaching them to identify them. "These are ingredients you don't usually find in your kitchen, as is the case with nitrites, salts used for food conservation. These are compounds that add to food, for example to cecinas - salted and sun-dried meat, air or smoke – and react with elements that we find in the same product or with our stomach, can cause cancer".

The Dra. Ruedlinnger added, In addition, that "processed and ultra-processed foods are often found in student colaciones or in our daily meals, but there are healthy alternatives". Like this, invited them to "eat wholemeal bread, but truly comprehensive. We have to make sure they contain wheat germ as it has vitamins, minerals and fiber. Another alternative is the mixture of oatmeal with fruits and/or with almonds or seeds".

Ruedlinger didn't just give a healthy eating class, but taught how we should feed ourselves if we want to be healthy people. In this context, Sofia, student of the course who participated in the Scientific Chocolatada, commented emotionally: "it's very important what we were taught today, because now I can go with my parents and uncles, and tell them the things they're doing wrong when they eat..

The interest of Dr.. Ruedlinger in scientific research has its beginnings in its period as a student of veterinary medicine, where it counts that even though it's a pretty career, much of it is animal production for human consumption, what wasn't of interest to him.

At graduate time, joined a FONDEF of high blood pressure from the University of the Border, as a research assistant, where he began his first steps in studies of chronic diseases by analyzing genetic and epigenetic factors in Chilean patients. Specifically, he studied an enzyme – CYP2C19 – that humans possess to metabolize certain medications and whose alterations may affect the effectiveness of the use of these, as has been the case with the drug Clopidogrel, used in patients who have undergone coronary artery interventions, which are the blood vessels that nourish the heart by ischemic diseases – reduced blood flow and oxygen to the heart –, these diseases represent the leading causes of death worldwide, according to the Pan American Health Organization Chile.

During this stage, the Dra. Ruedlinger attended several meetings and congresses on cardiovascular diseases. "I started making noise that it was normal for people to have closed arteries or hypertension, Overweight, Diabetes, wondering why, if in reality all this is preventable with changes in lifestyle habits such as food".

"I started making noise that it was normal for people to have closed arteries or hypertension, Overweight, Diabetes, wondering why, if all this is actually preventable", designates the Dra. Jenny Ruedlinnger.

It was like that., how after his doctoral research he wanted to focus on topics more related to epidemiology, to study the consumption of processed meats and the development of cancer in Chile. "What interests me most, is to be able to put this topic on the table and also contribute with information about what happens to the population of our country, because all the studies in this regard come from large cohorts either from the United States or Europe, which are different realities than the Chilean," Jenny said.

Vegan diet as an option for a healthy lifestyle

Chronic diseases, among other causes, are produced by poor diet, so dr.. Ruedlinger opted for veganism , excluding meat and all animal derivatives, such as cheese, milk and eggs - by moral principles and a healthy lifestyle. Like her, many people also opted for this lifestyle, for the welfare of animal life, bring to the planet and a healthier life.

A study conducted in Chile by the UDD and the German Clinic in 2013, 74% of people who opted for veganism do so on moral principles, but they had ignorance about whether there are health consequences. Whether a vegan diet is healthy or not, so far it's been a controversial issue, but over time more scientific knowledge has been acquired.

One of the latest studies on this subject in Chile, was published in the 2017 Chilean Journal of Nutrition, where it stands out that these diets are rich in dietary fiber, Antioxidants, vitamins C and E, folic acid and unsaturated fatty acids, but low in total fat, cholesterol and saturated fat, vitamins A, B12 and D and omega-3 fatty acids, among others. However, one aspect that has caused debate about this type of diet is that whether they are low in iron or not. In this respect, the National Diet and Nutrional Survey Inlatera showed that people who opted for a vegetarian or vegan diet did not have iron deficiency.

The implication of a vegan diet is still under investigation, so the Ministry of Health (MINSAL) calls to inform therefore well in order to meet all the nutritional needs required according to the age and nutritional status of the person wishing to opt for it and suggests, In addition, which should be supervised by a nutrition professional.