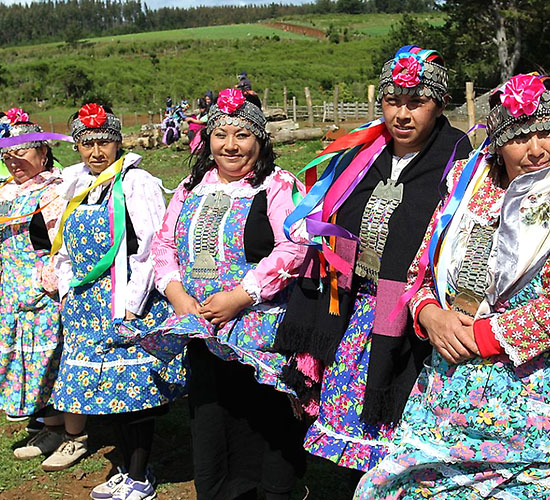 Ricardo Verdugo and Vinicius Maracaja, academics from the University of Chile, lead the team of researchers that will collect samples of national population of mestizo origin, Mapuche, diaguita and aymara. The project, funded by the philanthropic organization Chan Zuckerberg Initiative, seeks to enrich an international repository on genetic data of the global population that will allow - for example -- strengthen the study of specific diseases at the local level.

"Latin America is one of the richest regions in the world in terms of ethnic diversity and genetic mix between indigenous and continental European ancestors.. These populations are underrepresented in the Human Cell Atlas and may harbor specific expression patterns not discovered at the cellular level.. Without a high-resolution characterization of these little-studied Latin American populations, the development of precision medicine strategies in the region will be limited and health disparities will be perpetuated.". This is how Dr. Ricardo Verdugo explains, academic of the Human Genetics Program of the Faculty of Medicine of the U. of Chile, what is the main motivation behind the project that seeks to contribute to this international repository on population genetics, an initiative that he leads together with the academic of the Faculty of Chemical and Pharmaceutical Sciences of our campus and researcher of the Advanced Center for Chronic Diseases (ACCDiS ), Vinicius Maracajá-Coutinho.

The Chan Zuckerberg Initiative, details, "made a competition open to projects that increase the diversity of the cellular atlas, which is an international initiative to have a database of gene expression in all tissues of the human being, and that currently has a lot of information, but coming from very few population groups, mostly of European ancestry. Then, aim to enrich this resource with samples from Asia and America".

Currently, Ricardo Verdugo leads the LatinGenomes network with Dr. Andrés Moreno Estrada, of the National Laboratory of Genomics for Biodiversity of Cinvestav, Mexico, a platform that "brings together academics working in genetics and human genomics to generate collaborative projects and resources accessible to the entire community, in order to enrich the availability of material and data of Latin American populations in international genomic repositories, because it is very scarce". In this way, together with scientists from Brazil, Colombia, United States – Florida- and Peru, in addition to Mexico and Chile, "we decided to send the Chan Zuckerberg organization a proposal to do single-cell sequencing studies of the population of each of these countries".

In this way, thanks to the funding of two million dollars to be distributed among all the groups of researchers of the continent, Dr. Verdugo will work on obtaining blood samples from the Diaguita population, based on the link established with them through a project with Fondecyt 2019 financing. At the same time, Dr. Katherine Marcelain, academic of the Department of Oncology of the Faculty of Medicine – who leads the Horizon 2020 project at the national level, an initiative funded by the European Economic Community to develop the largest gallbladder cancer study in Latin America-, "He proposed that we direct part of the sampling to indigenous populations in a remote locality in the North., near Colchane, where people of Aymara and Mapuche origin live, because among the latter there is a higher incidence of gallbladder cancer".

From the participants will be obtained, with prior informed consent, the corresponding blood samples; but, In addition, gallbladder samples will be collected from the Mapuche population, "when it is the case that they are operated on for gallstones, removing tissues without inflammatory lesions from this organ, because this project seeks to generate repositories of samples and data to serve as a healthy control for future studies with a disease approach. As in Chile we have a high incidence of gallbladder cancer, we proposed to generate this map of cell expression in the healthy vesicle so that possible future studies can use these data as a comparison parameter.", designates the researcher.

In addition, Adds, "through Professor Vinicius Maracaja-Coutinho we will take samples from the Mauco cohort – a population group from the city of Molina, in Region VII, which is followed by researchers from the Advanced Center for Chronic Diseases, ACCDiS , with the aim of studying exposure factors for non-communicable pathologies such as cancer or cardiovascular problems-, but we will specifically select those who have greater Mapuche ancestry, based on an analysis we already carried out, whom we will invite to participate with blood and gallbladder tissue samples, when that is the case".

This data will be used to identify ancestry-specific RNA profiles in immune cell types., information that will complement the data currently available in the Atlas of Human Cells. In this way, the goal is to create a new network on the subject of gallbladder, relevant to the local epidemiology of the participating communities. This work should also enable the identification of specific molecular markers and mechanisms for future studies addressing immune responses and diseases of that organ..

All the samples collected will be processed for RNA extraction and generation of sequencing libraries, "which are libraries of DNA fragments that can then be sequenced.. After, all RNA and DNA samples that are collected and generated in all participating countries will be sent to Brazil, where they will be analyzed with the single cell sequencing technique, that allows to differentiate the molecules that come from different cells, to know the expression profiles of each cell type independently. In addition, from DNA we will typify their ancestry and correlate different levels of expression with that ancestry, not only within Chile but also among all participating countries", explains Dr. Verdugo.

In this area, Professor Maracaja-Coutinho highlights that "for the first time the technology of sequencing of single cells will be implemented in Chile, using the 10x Genomics app, which combines microfluidics, chemistry and bioinformatics for the sequencing and analysis of single-cell RNA data". On the other hand, He also pointed out that the data generated and the training of researchers and students in this project will serve to discover the cellular basis of the diseases with the highest prevalence and the immune system adapted to selective environmental forces of the region.”.

Also, "and since as a network we will have to connect with other working groups, also funded by the Chan Zuckerberg Initiative, we may share data with the different participating projects, to compare us -for example- with India or Africa, and see if there are expression profiles or correlations between cell types that are particular to a population or, otherwise, shared with another population, and then investigate what are the genetic factors that explain that we have unique or shared profiles".

Dr. Verdugo indicates that the work with Professor Vinicius Maracaja-Coutinho will allow, In addition, generate development in the field of bioinformatics. "To make this data available to the community, we will have an informative portal for the general public, but also with a scientific part so that people can access and consult the data we obtain. The great contribution that will allow all this work is that many other research groups will test different hypotheses referring to specific diseases. As our information is freely available, it will make it easy and quick to ask questions of this data or compare it with new knowledge that it can generate under particular conditions.".