During 7 and 8 January just past was carried out a new version of the "Knowing MAUCO" activity. This event brought together more than 30 ACCDiS researchers and collaborators, those who had the possibility of understanding on field work carried out this project, as well as also and know that line of research, It seeks to analyze the natural history of chronic diseases in the commune of Molina, in the Maule Region. 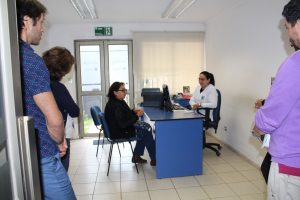 MAUCO is a Chilean study consisting of a population-based cohort that includes ten thousand Molina residents between the ages of 38 and 74 and lasts for ten years. It is run by the Dra. Catterina Ferreccio, who is also the Deputy Director of ACCDiS.

In this respect, research associate ACCDiS - that belongs to the line of metabolic signaling in the heart - failure, Mario Chiong, He pointed out that "it was a very good activity, that allowed us to see firsthand all the field work being carried out in MAUCO. In addition, We know those involved in this project, talk to them; and also discuss with the rest of the researchers, share and generate new ideas in order to visualize future work to be searched with this cohort to do".

In both, associated ACCDiS researcher in the area of biology of tumor cells and inflammation, Lisette Leyton, He added that "the journey to MAUCO found me very interesting, I think it is a very valuable and important to continue project. It is worth emphasizing the fact to see people instead of work, collecting material directly with those who participate in the project, It is like watching a natural laboratory results in situ", completed.