Advanced Center for chronic diseases (ACCDiS ), is pleased to announce that it is in 3rd place nationally, in the SCImago Institutions Rankings (SIR)2022

Scimago Institutions Rankings, also known as SIR World Report, analyzes institutions from five sectors: Government, Bless you, universities, businesses and non-profit organizations. To be included, institutions must have published at least 100 papers in the SCOPUS database during the last year of the five-year period analysed, which ends two years before the ranking edition. The results used for the 2022 edition are those of the five-year period 2016-2020, with the exception of web indicators, which are calculated only for the last year. The ranking analyzes 17 indicators grouped into three main areas based on:

And provides overall results, but also classifications by thematic areas.

In the SIR World Report 2022, considering all thematic areas and sectors, the Center for advanced chronic diseases (ACCDiS ) has climbed 159 positions and is ranked 482nd worldwide and 3rd nationally.

The ranking, it also divides the scientific production of the institution into 19 major areas of knowledge. For an institution to have a presence in an area, it is necessary to exceed in the last year a minimum production threshold equivalent to twice the percentage that this area represents in the world.

Advanced Center for chronic diseases (ACCDiS ) has reached high ranks in the areas of Biochemistry, Genetics, Molecular biology, Medicine, Pharmacology, Toxicology and Pharmaceuticals. Areas shown below, in the following table:

At the same time, includes the journals used by the researchers of the institution to publish their work in the last year.

In the following visualization you can identify the areas of knowledge where the Advanced Center for Chronic Diseases (ACCDiS ) has published, recognize the prestige of the scientific journals in which the knowledge of the institution has been published and identify the predominant scientific communities. 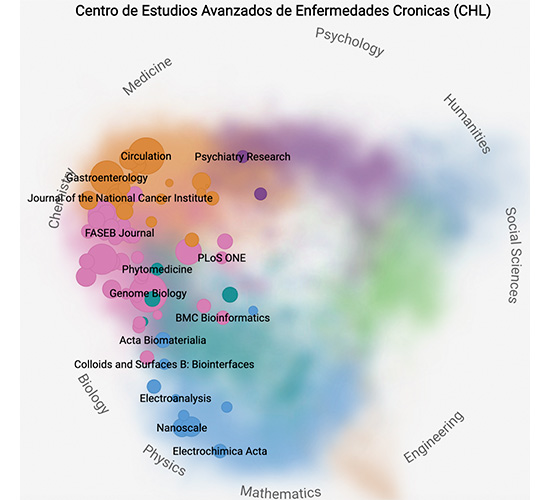 the size of each circle represents the value of the sjr of the publication, and its spatial position represents its theme.

The ranking is one of the most prestigious worldwide and is of special relevance for those institutions of higher education and scientific research centers, that include in your project activities that, next to research, emphasize the development of technology transfer and dissemination of science and that, year to year, seek to consolidate their position in the world of research.