Yes, this regrowth is delta: isp found this variant in '97,4% of the last samples processed 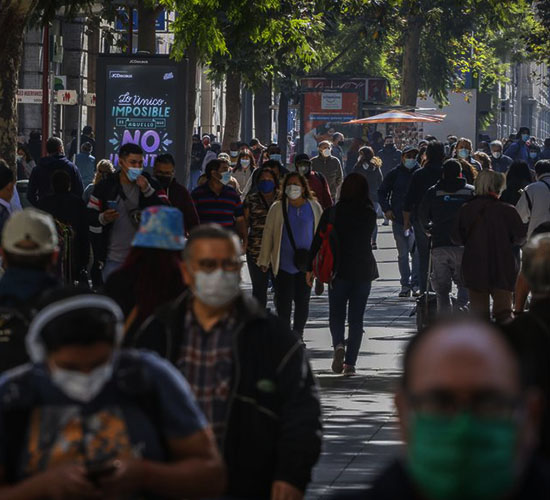 In less than five months this lineage achieved almost total dominance in the local circulation of the coronavirus. Experts allude to its high contagiousness: one patient is able to infect nine people. However, and associated with the country's high vaccination coverage, has not been shown to be more aggressive.

In December 2019, in the Chinese city of Wuhan, a patient was hospitalized with a symptomatology that did not fit with any known disease. That was the first case of Covid-19, a virus that plunged everyone into a pandemic.

To date, at the global level, 254,562,905 people have been infected and 5,118,632 have died from the virus, according to data from John Hopkins University. In addition, since its appearance, the virus has had several mutations, i.e., changes in your genetic information, which generated variants with new features, behaviors and scope.

From the detection of new lineages, the most crowded in the country were alpha, beta and gamma, originally detected in the UK, South Africa and Brazil. That until the arrival of delta, which was first identified in India in October last year.

Like this, it took eight months until it was detected in Chile for the first time. It was the past June 23, in a Chilean woman living in the United States who traveled to the Maule Region. The finding raised alarm: there were already clear indications of the greater speed that this lineage reached in its propagation and its ease to generate regrowths in the territories it colonized..

And in 20 weeks, delta has done the same in the country. The variant has almost total dominance in the circulation of coronavirus and was detected in 97,4% of the samples processed by the Institute of Public Health until the last days of October. 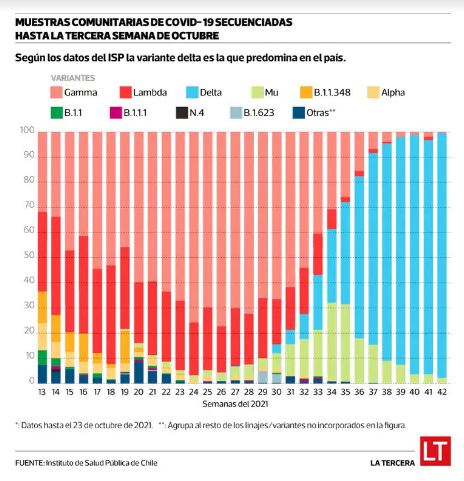 This has not been the case with any other variant. Since genomic surveillance began, ISP analyses had shown how new lineages entered and went on to capture a portion of the circulation., Sharing, At last, with several other strains their presence in the Community circulation. That's why delta, given its high contagiousness, is a particular case.

Gabriel Cavada, epidemiologist and academic of the School of Public Health of the U. of Chile, explains the reason behind this phenomenon: "One might assume that this departed two weeks earlier. (of the first case detected) and there he covered the contagion. The UK strain, alpha, and that inaugurated the pandemic in Chile, had an R0 (contagiousness) of four, i.e., that one case was capable of infecting four. Delta has an R0 of nine, that is, an infected person is capable of infecting nine other people".

The effects of the variant were seen quickly and increases in delta-related cases affected several cities.. For example, to at the end of September, the outbreak in the Arica Region originated from this strain. The same in Aysén, that is experiencing a sharp rise in cases.

In addition, is the cause of the current outbreak across the country. The infectologist of the Clínica Universidad de los Andes and dean of the Faculty of Medicine and Sciences of the Universidad San Sebastián, Carlos Perez, explains that "it was somewhat predictable, due to the high transmissibility it has. In Chile, the same thing is happening that has already happened in the countries of Europe., then it is not surprising and this explains the resurgence we are having".

Claudio Castillo, academic in Public Health at the University of Santiago de Chile, emphasizes that "it has a behavior with the highest contagiousness demonstrated, but there is not necessarily greater aggressiveness in terms of people's likelihood of aggravating themselves., this also because most of the population is vaccinated; However, that it is more contagious implies that measures such as the correct use of masks are much more relevant.

The vaccination campaign showed positive figures. Chile became the first OECD country to exceed 200 doses administered per hundred inhabitants, which was highlighted by the organization itself.

According to figures from the Department of Health Statistics and Information (Give), there are already 13,185,598 inoculated with both doses and one advance – one dose- 93% nationwide. In addition, Aysén has already reached 100% coverage with a complete scheme, while Ñuble and O'Higgins are getting closer, with 98,6% and 97%, respectively.

Immunization plan has allowed for better protection against delta, experts agree. Catterina Ferreccio, epidemiologist at the Faculty of Medicine of the Catholic University, points out that with a large part of the population immunized, this variant found us at a good time: "Being vaccinated did not have the impact that was seen in Israel., United Kingdom and United States, has been much softer, because protection has made people less infected, that's why we haven't seen the rises that were seen in the first waves.".

"Fortunately, vaccines and particularly booster doses help protect against delta, not in the same way as it does with other lineages, but they do protect from infection, complications and death.", Adds, at the same time, Pérez.