“Being a woman or a man does not mean better or worse performance in any activity., all people are capable”said Dr. Ulrike Kemmerling 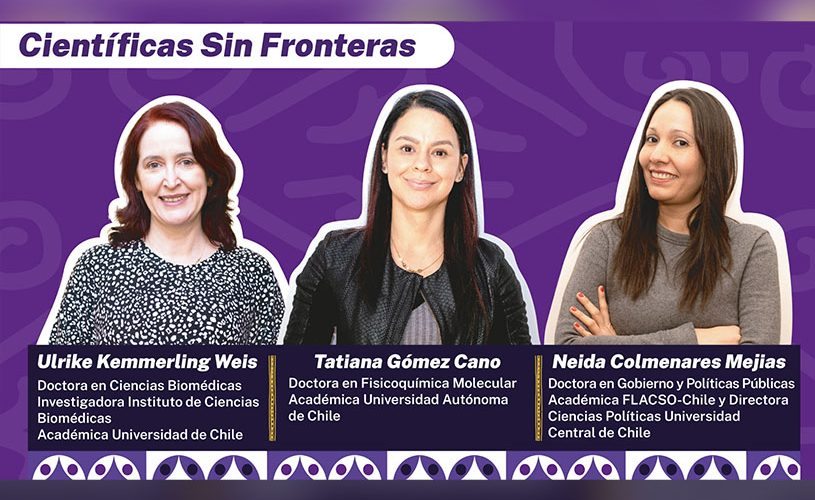 “Scientists without borders" was the name of the conversation that brought together three researchers participating in the initiative "Nice stay", organized by the Explora Northern Metropolitan Region Project of the Ministry of Science. The activity seeks to inspire and motivate more girls, young people and women to approach the sciences and close the gender gap in these areas.

According to the latest data provided by the Department of Aliens and Migration and the National Institute of Statistics, 77% foreign population resident in Chile is concentrated in 42 communes of the national territory, including: Santiago, Independencia, The Countess, Recoleta, Ñuñoa, Quilicura, Providence, Hill, Conchalí, Lo Barnechea, Pudahuel, Vitacura, communes with which Explora RM Norte works.

In this sense, the initiative "Equally Wise: Scientists without borders", seeks to highlight the contribution of migrant women in science, technology, knowledge and innovation. Highlighting women from Peru, Venezuela, Colombia, Russia, Germany, Paraguay, Cuba, Argentina & Denmark, all of them researchers who give life to this initiative.

During the conversation, Dr.. Tatiana and Dra. Neida commented that among the obstacles to developing as a woman scientist in Chile and many parts of the world, in the Neida case, are the stereotypes that by culture predominate in society. They also highlighted the number of validations and procedures that must be done to be able to certify their knowledge..

On the other hand, the Dra. Ulrike said that she has been a migrant since she was very young., before coming to Chile he lived in Colombia and then being here he lived in Santiago, in Concepción and in different regions "But these circumstances give you tremendous strengths, they better prepare you to overcome difficulties and see life from another perspective," he added..

Contribution to science in Chile from its research areas

Neida with her team, are carrying out a survey of the migratory phenomenon from a territorial perspective "We seek to evaluate how this sociocultural phenomenon affects each region and how the state can generate differentiated policies and get out of the homogeneity of the migratory discourse, we hope to be able to give policy recommendations, learning and territorial diagnoses" he explained.

From the area of biomedical sciences, where she specializes Ulrike commented that they are studying the interaction between pathogens and the placenta. "We are particularly studying Chagas disease., a topical disease and neglected by the World Health Organization because its spread generally occurs in very poor populations and therefore the pharmaceutical industry has displaced it from its priorities. We hope in the future to have drugs that treat the disease, but for this we must know the infection in depth", dr.. Ulrike.

To finish, Tatiana reported that from her research area focused on simulations, They worked on a system called "machine learning" – machine learning – it is an indispensable skill to make systems capable of identifying patterns between the data and making predictions. This system contributed to the implementation of efficient tests for the diagnosis of certain diseases, such as COVID19.

Explore NORTH RM, is an associative project led by the University of Chile, through the Faculty of Chemical and Pharmaceutical Sciences and its executing unit is the Advanced Center for Chronic Diseases (ACCDiS ).