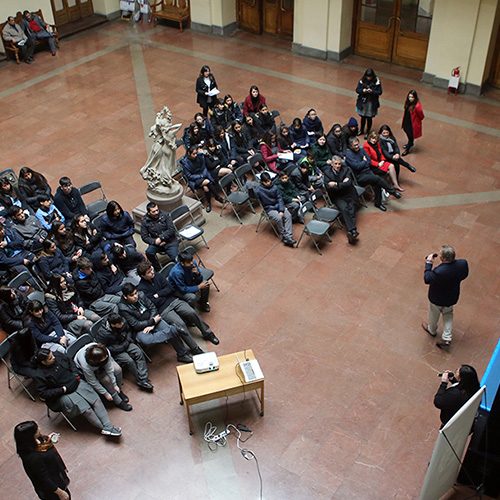 With the “Scientific chocolate: cancer a biography”, the scientific program headed by the scholar of the U. Chile and researcher at the Centre for advanced chronic diseases (ACCDiS ), Mario Chiong, It brought together dozens of schoolchildren to expose, and then discuss the causes, treatments and ways to prevent this chronic disease.

Dozens of students and teachers of different establishments in downtown Santiago came to the Town Hall of the municipality to participate actively in the "Scientific chocolate: "cancer a biography", organized space for the regional partnership project explores RM North, in which the researcher of the ACCDiS Gareth Owen, It was reported and talked with attendees about this disease.

As noted the associative project manager regional explores North RM, academic of the U. of Chile and also researcher ACCDiS, Mario Chiong, celebrate the day of the public education educational communities to meet responds that it is “work of the State but also us as program explores, improve the quality of the education of the children and this is one way of doing it, approaching people that generates knowledge in the country children and transmit that knowledge to help them improve their quality of life”.

For the Director of the ACCDiS and academic of Faculty of chemical and pharmaceutical sciences, Sergio Lavandero, in the treatment of chronic diseases such as cancer, “There are factors that we can change and that depend on us”, as they are “have a healthy diet, no smoking, and not having a sedentary lifestyle”. On the other hand, “There are other factors that are genetic and can not modify, so the only thing we can do at this point is to try to prevent these diseases which are incurable, and that is why we have taken aimed at these children in this age, because they are those who can try to influence them to change their behavior".

Cancer and its stages

What is cancer?, Why there is no cure for this disease? and what are the treatments and its effects on the body?, fueron algunas de las preguntas que resolvió el investigador del ACCDiS Gareth Owen, making an analogy of the different stages of the disease with life of a human in this talk which was also translated into sign language.

“Analogies that exhibitors used were very appropriate to the public and allowed take a look other than cancer, and also go to understanding their different stages", highlighted the profesor del Instituto Superior de Comercio Eduardo Frei Montalva (INSUCO), Diego Vergara. 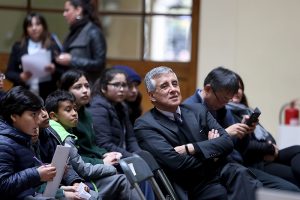 In this respect, Ivana Forno, profesora de Biología del mismo establecimiento highlighted initiative “Since it exposes a subject which is of contingency and that increases more and more in the Chilean population”.

For Jorge Díaz, estudiante de segundo medio del INSUCO was relevant “as the doctor addressed. I liked that it uses images and tried to explain the stages of life based on PowerPoint, come closer and help those who participate”.

Children participated in the activity, In addition to teachers of various establishments of the commune, además de autoridades municipales como Yoris Rojas, Director of education of the municipality of Santiago.