OncoTherad: promising therapeutic option for the treatment of cancer

Dr. Nelson Durán held a seminar for academics and students in which presented the advances in the development of a new therapeutic alternative OncoTherad. This drug was synthesized from a biological molecule discovered in fungi and which generates a cell response with encouraging effects in different types of cancer treatment.

Dr. Durán began his career at the Catholic University of Valparaíso and for more than 40 years has served as a chemistry professor and researcher in the University of Campinas (UNICAMP) -Brazil. He is currently member of the Scientific Advisory ACCDiS international and this Thursday we had the chance to hear firsthand his scientific research with more than 30 attendees, most researchers in training process.

The development and application of the OncoTherad molecule, It has been one of their most recent research, that points to the development of a promising therapeutic option for the sensitization of cancer cells. Clinical studies showed that in animals diagnosed with bladder cancer and who were treated with the drug showed a significant recovery in the advancement of cancer, reducing the amount and size of the neoplastic urothelial lesions, characteristic symptom of the progression of the disease by nearly 80%.

Currently OncoTherad is already in the stage of clinical trials in humans where the favorable response in cancer patients has been terminals that already did not respond to traditional therapies. In these patients the progression of disease remission has been increased the survival prognosis in at least 40%.

Another interesting feature of this drug its effectiveness for the treatment of various types of cancer such as bladder, stomach, glioblastoma, carcinomas among others and without the side effects of current treatments.

In the presentation Dr. Durán showed step by step the process of discovery and production of the drug substance and the challenges of the development of this, He also gave important data and considerations for the future of the students as researchers.

The seminar: "Onco-Therad: A New Nanobiological Response Modifier, "its Toxicological and Anticancer Activities in Animals and Humans" is part of the cycle of seminars and lectures organized by ACCDiS to facilitate the meeting of academic experts in different areas of scientific research with students on stage training to help form active in the formation and creation of networks and which are part of the objectives of the Center.

For more information about the following seminars and training spaces, follows the ACCDiS networks. 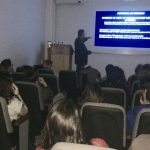 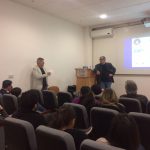