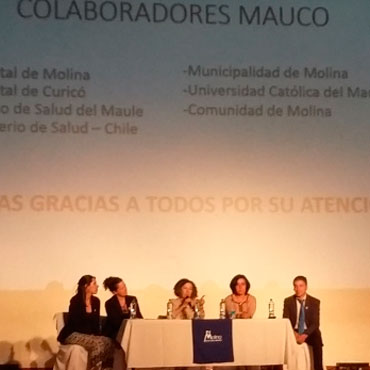 It highlights the great participation of the community, local authorities and the professionals and technicians of the health teams, the support of the Catholic University of Maule.

MAUCO explores a wide range of health conditions, which is derived from a series of recommendations such as physical activity, at least, 30 minutes a day, 5 times per week, increase the consumption of fruits and vegetables and reduce the consumption of tobacco and alcohol.

Cancer and cardiovascular disease are chronic diseases that, altogether, affecting 60% of the Chilean population, constituting also the two leading causes of death in the country. Before such a scenario, 220investigadores of the University of Chile (UCH) and the Pontifical Catholic University of Chile (PUC)they formed the Center for advanced chronic diseases (ACCDiS ) in order to investigate the origins of these pathologies, and design therapies and diagnostic tools to generate a positive impact on health. This Center financed by the Fund of financing of centers for research in priority Areas (FONDAP) CONICYT has launched the first epidemiological study of chronic diseases, called MAUCO, seeking to observe and assess the natural history of cancer and cardiovascular diseases, whose incidence in that area, is the highest in Chile.

This research, New in our country, shall extend at least ten years and will carry out monitoring of ten thousand inhabitants of the city. This study includes surveys, biological sampling and other indicators, it allow to give an account of the biological and environmental factors that predispose to the development of chronic inflammation and diseases, such as, gallbladder cancer, disease that is the leading cause of cancer death in Chilean women. MAUCO also boasts a BioBank where blood samples are stored, urine and saliva, It will analyze health issues and search for biological markers for chronic diseases. The results obtained will also generate new crossings and research, and related health indicators and biological factors, with environmental issues, social and lifestyle, contributing new results and measures of prevention.

The first results of the State of health of 1,700 inhabitants of Molina, Of the first year of MAUCO Maule region arose do a few days at the Teatro Municipal de Molina community. The activity included the presence of the Mayor of the commune, Priscilla Castillo; the Senator from the Northern Maule Region, Andrés Zaldívar;the Director of the health service of the Maule, DRA. Patricia Leon; the Director of the Hospital de Molina, Mauricio Olivares, Dres. Sergio Lavandero and Caterina Ferreccio, Director and Deputy Director of ACCDiS, together with researchers from the Centre, authorities and inhabitants of the area who have participated in the study. In the opportunity, the Building Authority thanked the work developed by the research team, indicating that after the results will be "fundamental advance in the care of the health of our citizens".

Factors such as the type of power supply, level of physical activity, vesicular and cardiovascular health, as well as psychological aspects, social, Economic and environmental have been analyzed in this cohort, that it regards men and women, between 38 and 74-year-Molina commune.

"These first results of the study, toss that in some respects we are poorer than in the rest of Chile and other, Molina has major strengths. The important thing is that from these analyses, We can contribute to improving the health of people and prevent their illnesses, for example, making substantial changes to the type power", explained the Dra. Caterina Ferreccio, Deputy Director of ACCDiS and Director of the project MAUCO.

In this context, the researcher and epidemiologist of the PUC said that they hope to convert to Molina, in the "first surveillance Center, from which we can learn and apply measures that are useful not only in Chile, but also in the world".

The seven categories of health

MAUCO study places emphasis on healthy and preventive behaviors, above the risk and disease. "This look is a change of perspective from the classic risk factors for a promotion of ideal health and primary prevention, It may lead to improvements in lifestyles", said the internist and epidemiologist Claudia Bambs.

Recent studies consider that the presence of seven simultaneous categories, they are ideal and beneficial for heart health: no smoking, BMI less than 25 kg/m2; high physical activity; healthy diet; less than 200 mg/dL cholesterol; blood pressure under 120/80 mmHg and less than 100 mg/dL blood glucose. These parameters were studied for the first time in this Chilean population, being both of poor diet and lack of exercise, the most recurrent flaws.

In this respect, It was estimated that only a 2,9% of the population had an ideal diet. In both, the highest parameter of health was not smoking or have stopped doing so last year, index that reached 65,3% of respondents Molina, and that explains the specialist, It is more positive than the general reality of Chile.

The first results of the study are relevant and valuable to researchers at ACCDiS, given that constitute an opportunity to reorient public health policies. "Strong cross-sectoral population action is required, the empowerment and participation of individuals and their communities in the generation of strategies to improve the cardiovascular health of the Chilean population, with an emphasis on more critical components such as the diet". The Dra. Bambs explains that for decades Chile has developed mechanisms to decrease risk factors, as delivering a good treatment for hypertension or Dyslipidemia, or better control of diabetics. "However, These measures have not been sufficient and our bet is that we must promote healthy behaviors. In addition, It has been proven that greater cardiovascular health, It reduces mortality by such diseases and cancer", ensures.