The 6,5 million vaccines to win the first battle 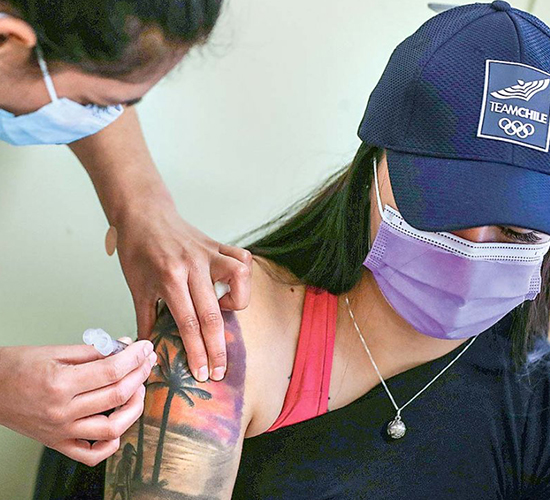 is, literally, a race against time. A race to achieve herd immunity, and with it to be able to lift restrictions and better cope with the emergence of new strains of coronavirus. Under the slogan "no one is safe until we are all safe", the G7 announced the donation of 1.000 millions of vaccines to lower-income countries through next year. It is very slow.

According to the plan proposed by the IMF, deliveries should be made in 2021 and make an extra effort for US$ 50.000 million. Only in this way would 70% of the world's population be vaccinated by the end of next year..

That doesn't mean the end of the pandemic., but it is an important first step. "All the estimates and models we have point out that we need coverage. (immunization) of at least 70% to produce some impact on transmission", explains Dr. Jarbas Barbosa, assistant director of the Pan American Health Organization (WHO Americas division), consulted by DF MAS. No country has yet reached that level.

One World in Data figures show Chile second, behind Israel (59%), with almost 46% of its population already fully vaccinated. There are 8,7 million people who have already completed their vaccination. But there is still.

The Ministry of Health has even defined a target of 10 points more on the level of consensus managed by the WHO, with a vaccination population of 15,2 million people, equivalent to 80% of the total population. I.e., missing 6,5 million people. Of these 2,5 million have pending the second dose, and the other 4 million have not yet received any.

For the Dra. Catterina Ferreccio, deputy director of ACCDIS and member of the advisory group ICOVID Chile, the objective defined by the Minsal, and even more so that proposed by the WHO, is conservative. "Our goal should be to vaccinate the entire population over the year of one year"., Sentence, and explains that, not to immunize children early, these will become a "Reservoir of Covid".

Scientists from the world have warned that as long as these "reservoirs" exist, the pandemic cannot be defeated. The existence of large groups of the population without immunization facilitates the contagion and the emergence of new strains. "We are in a war against the virus. We develop this vaccine and he develops variants. But we're gaining ground.", adds Ferreccio.

In the case of the current wave of the pandemic in Chile is the variant P1 or Gama, originated in Brazil, the one that is collapsing the hospitals of the Metropolitan Region. This strain multiplies by 10 the viral load and its transmission capacity is twice as high, with more option to infect younger people.

A calculation made for ICOVID reveals that, comparing to the peak of the pandemic in 2020, hospitalizations among those over 50 are at the same level, but they have tripled in those under 50. "Something that alarmed us as a council (adviser) are the deaths of children and pregnant women. We hadn't seen that in Chile.. When you see that, you understand that this is a very hard strain", details Ferreccio.

This does not mean that hope should be lost, or -worse- confidence in vaccines, warns: "If we hadn't been vaccinated, with this strain the dead would be in the streets. Without the vaccine, the situation would be dramatic. We've saved ourselves millions of deaths.".

But there is already another strain in circulation in the rest of the world, also affecting the youngest: the Delta variant, originated in India. It has an even higher level of transmission than P1 and has already been detected in 60 countries, including Peru. This increases pressure to speed up vaccination.

Barbosa also warns against a sense of false security. "We can only expect the person to be fully protected, when you receive not just a dose, but both. This is why it is important to combine access to vaccination with public health measures.", PAHO deputy director insists.

Another factor is that not even the two doses have an efficacy of 100%. Ferreccio explains that Sinovac, the most used vaccine in Chile, offers immunity around 70%. I.e., than three out of ten vaccinated, while reducing their incidence of death and hospitalization, remain susceptible to infection and spread.

"That's a giant reservoir.. This air-transmitted virus, and now for lower doses, you're never going to get it stopped if you have half the susceptible population. That's going to allow the virus to keep multiplying and keep mutating.", Ferreccio alert.

It's a long battle, experts recognize, and already in other countries the need for third doses to increase levels of protection is being raised. Until then, restrictions are necessary. "It's critical to maintain all public health measures that we know have the ability to reduce transmission.: wearing masks, avoid crowds and enclosed places", warns Barbosa.

In the case of MRI, quarantines fail to significantly reduce mobility. However, Ferreccio believes that -while it could be done in a better way, for example allowing outdoor activities and school activity when the hospital emergency goes down- on this occasion "confinement can serve to make the population understand the severity of the current wave of the pandemic and the need to accelerate vaccination, to all, as fast as possible". Not just to reopen the malls, but also schools.