Science is made available to constituents 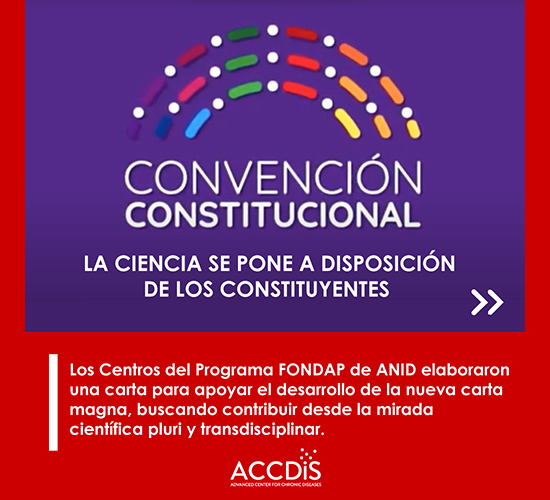 The formation of the Constitutional Convention for the drafting of a new Constitution represents an unprecedented and unprecedented process, which gives us a unique opportunity to establish a shared institutional floor at the national level. The joint work of the 155 elected constituents will make it possible to create a new Magna Carta in which the cultural and territorial diversity of our country is inherently incorporated in its elaboration, Allowing, Therefore, jointly build a nationally validated Constitution.

The centers that receive funding from the Research Centers In Priority Areas Funding Fund (FONDAP), of the National Agency for Research and Development (ANID), we aim to generate scientific research of excellence in priority areas at the national level through the articulation of interdisciplinary research groups. Our work also includes the formation of advanced human capital; the establishment of collaborative networks and the dissemination of research results to the scientific community and society at large. Fondap centers are, in short, research institutions of excellence that guide their work in such a way as to contribute to providing answers to national and global problems and challenges that require interdisciplinary dialogues, intersectoral and citizens nourished by the best available evidence and scientific knowledge.

In the above context, and seeking to be a contribution to the current discussion, is that today we want to make available to the Constitutional Convention the knowledge and experience that we have managed to develop over the years in the topics associated with the thirteen centers that sign this letter. With this we hope to contribute, from the multidisciplinary and transdisciplinary scientific perspective, to this important process that we live at the national level, contributing with our grain of sand to the drafting of a new constitution, the one that will generate the fundamental bases that will sustain Chile in the years to come.

We hope that this invitation will be well received by the Board of Directors of the Constitutional Convention.

No other particular, greet you attentively:

Diego Morata, Director of the Center of Excellence in Geothermal Energy of the Andes, CEGA

Pedro Mege, Director of the Center for Interdisciplinary and Indigenous Studies, CIIR

Maria Luisa Mendez, Director of the Centre for the Study of Conflict and Social Cohesion, COES

Maísa Rojas, Director of the Center for Climate Science and Resilience, (Cr)2

Gladys Vidal, Director of the Water Resources Centre for Agriculture and Mining, CRHIAM

Humberto Gonzalez, Director of the Center for Research on Dynamics of Marine Ecosystems of High Latitudes, Ideal

On the other hand, Dr. Sergio Lavandero, Director of ACCDIS, fac academic. sciences, chemical and pharmaceutical and medicine of the U.Chile and UTS emphasized “Having priority areas of research is key to solving the country's problems and collaborating with public policy. In accordance with this purpose, the FONDAP Advanced Center for Chronic Diseases (ACCDiS ) has the mission the study of the most important diseases (84%) that afflict our population, such as cardiovascular diseases, cancer, Diabetes. Obesity, among others”.