MAUCO project researchers aimed at population on use of antibiotics 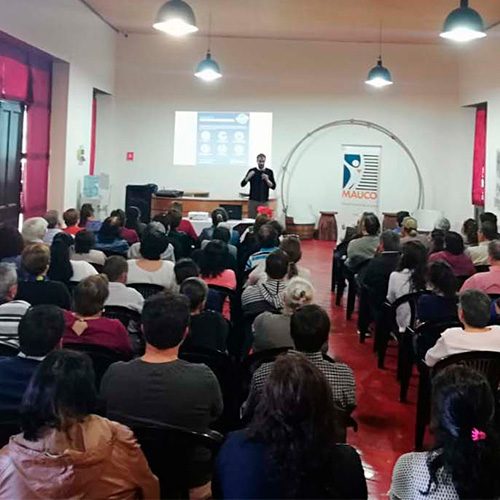 Recently, the team of the cohort MAUCO He made a speech to the community in which the Dr. Rafael araos, Member of this population-based study, He addressed the proper use of antibiotics, its benefits and risks being used in excess.

More than a hundred people who heard the talk of Dr attentive participated in the occasion. Araos, showing the interest of the community in the work done by MAUCO cohort, population-based study that seeks to learn about natural history and protective, and factors of risk of chronic disease in the commune of Molina, Maule region.

Consulted on the work done by researchers, Dr. Rafael Araos commented that "we are trying to understand flows of bacteria between the environment and people, study its existence, their risks, to determine if the environment is contaminated and if such pollution affects or not people".

For this reason, the cohort MAUCO has also worked to involve the community of Molina in this topic. "We want to not only develop research activities, they involve also the cohort as such, people are an activities that we will make. Why did this first briefing about what we do, We explain to attendees why they took samples of bacteria, Why is it important to take part and what is the relevance of the resistance to antibiotics", added Dr. Araos.

The idea of the researchers is to inform about antibiotics and its benefits, they are no doubt multiple, but taking into consideration that should not be used indiscriminately, since doing so "we are changing the microbiota that lives in us, on Earth, in the water, going to have bacteria that were sensitive to antibiotics that are resistant to them", ended the doctor Araos.

Then check out the photo gallery