Researchers from the U. in Chile, they develop high-efficiency technology for the treatment of multiple sclerosis 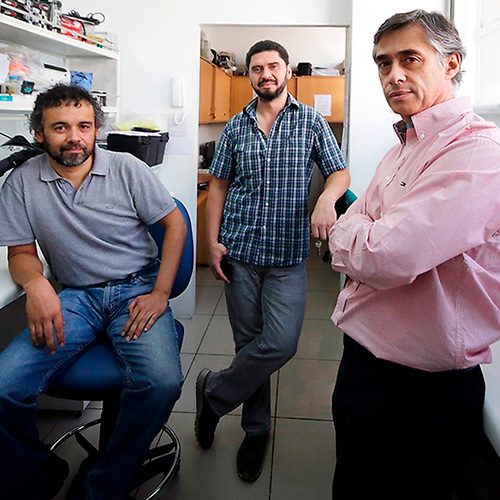 A preclinical study showed remarkable therapeutic effectiveness of nanoformulacion that encapsulates and leads directly to the central nervous system the current existing drugs for this disease. The mechanism would make it possible to lessen the symptoms of disabling associated with this disease that affects about 2,5 million people in the world, optimizing its management and reducing by 40 percent about their high cost. The researcher in charge of the research, Rodrigo Naves, It raises the possibility of applying this innovation to other diseases of the central nervous system.

A spray that allows low-dose inhaled current medications "immunomodulators" used worldwide for the treatment of multiple sclerosis is the purpose of a group of researchers from the University of Chile. Team the Institute of Biomedical Sciences, Faculty of medicine, directed by Dr. Rodrigo Naves, It developed a technology that encapsulated in nanoparticles Interferon beta - first-line immunomodulatory therapy and widely used in the market- to take it nasal route directly to the central nervous system, the area affected by this pathology.

The experimental work was driven from a Fondef project and its results were surprising. The nanoformulacion managed nasalmente showed greater efficiency, efficacy and effectiveness with regard to systemic administration which currently deals, consisting of immunomodulators by intramuscular or subcutaneous injection. The study revealed that a noticeable improvement in the symptoms associated with the disease has been obtained through this mechanism (as the motor disability) in comparison to the traditional application of medication.

"In an experimental model of multiple sclerosis, our nanoformulacion -containing a encapsulated immunomodulator– He was able to reduce the clinical symptomatology significantly using low doses of the same. That means, for example, our groups of study with total paralysis of hind limbs returned to walking and virtually recovered. On the other hand, the systemic application of these same dose not encapsulated immunomodulatory had no effect. In addition, We were able to reduce the frequency of application of the nanoformulacion and it remained effective", said the ships doctor.

One of the most serious consequences of this disease, currently has no cure, is it progressive disabling effect, to cause communication problems between the brain and the rest of the body and, in this way, affect walking and the vision of people who suffer from it, among other aspects. This is caused by an alteration of the immune system that attacks the protective sheath of neuronal axons (myelin sheath), What affects the transmission of the nervous impulse and generates motor problems and neurological impairment.

In this area, the investigation showed the significant advantage of the nasal administration of the immunomodulator encapsulated in nanoparticles compared with systemic administration of the same non-encapsulated. "We analyze histological signs of spinal cord and brain of the treated groups, finding that the lesions of demyelination is recovered and reversed, i.e., is remielinizaron. It is known that Interferon beta does that, It is effective as one of the treatments most used by patients. The difference is that we find that in the preclinical model is effective in our formulation dose in which systemic treatment is not", added, realizing another attribute: the possibility of decrease doses and frequency of the medication administration.

Lower costs and side effects

Currently the average expenditure which this disease means the world for patients, pension health institutions and the State ranges between 16 k and 25 thousand dollars a year. Interferon beta, for example, It has a cost to the State of 8,4 million pesos per patient per year in Chile. In this sense, the possibility of reducing dosage and frequency would have a direct effect on treatment costs for the about 2,5 million patients worldwide and more than 1,900 diagnosed that exist in Chile, in a dear universe of 2,500 persons with this pathology (figures from the Corporación Chile Multiple Sclerosis).

"We could lower the dose and continue making it effective", In addition to decrease the frequency of administration. In theory, in patients the decrease could be 3 or 4 times less. Therefore, to receive less amount monthly the monthly cost of treatment should be reduced. We estimate theoretically, in total, and under a conservative estimate, that we could reduce between 30 and 40 percent of current costs”, said the scholar from the University of Chile.

While current treatments immunomodulators are the only ones able to slow the progression of the disease, between 40-50 percent of patients respond weakly, do not respond or they may even have exacerbations of the disease. In part, This is because the therapies are applied in the systemic form for a disease of the central nervous system. As a result, These should be applied in high dosage and frequency. In addition, Some treatments are injecting, what generates discomfort and rejection in some patients. Therefore, a smaller amount and frequency in your Administration would have a positive impact in relation to its effectiveness and the occurrence of side effects. In this way, future work has as goal to develop a spray that represents an option not only more effective and economic, but also more friendly and it allows to increase the adherence of patients to the treatment.

Technology, In addition, has the potential to be applied in other neuroinflamatorias diseases, such as parkinson, Alzheimer's disease or Amyotrophic Lateral Sclerosis (ELA), said Dr. Ships. "The system is designed so that one can encapsulate various active principles. For all of these diseases there are treatments that have the same disadvantages that have this immunomodulator (Interferon beta) to reach the central nervous system, they are administered systemically, and at high doses. Within our goals is to apply it to other diseases also changing the active principle".

Team, by Felipe Oyarzún academics, of the Faculty of chemical sciences and pharmaceutical and research of ACCDiS, and Luis Gonzalez, the Institute of Biomedical Sciences, Faculty of medicine, prepares a second phase of research for this work, the study be published in an international scientific journal and already held an international patent application in the world intellectual property organization (WIPO).