Explora RM Norte kicks off Open Science: Breaking down the frontiers of knowledge

Since June the Project Explores Northern Metropolitan Region of the Ministry of Science, invites the entire community to be part of the "Open Science" initiative: Breaking down the frontiers of knowledge" composed of various virtual activities such as: commemorative talks, conversations with great scientists, informative talks for schoolchildren, radial spaces, among others.

Explore NORTH RM, is an associative project led by the University of Chile through the Faculty of Chemical and Pharmaceutical Sciences and its executing unit is the Advanced Center for Chronic Diseases (ACCDiS ).

Open Science is part of the program of the Science and Society Division of the Ministry of Science, Technology, Knowledge and innovation, called "Public Science", which seeks to strengthen the link between researchers, disclosers and society, through virtual meetings in playful and participatory formats, that promote the socialization and appropriation of knowledge at all ages.

Unlike last year, the "Open Science" initiative will be framed in five activities:

Monica Villa, coordinator of the initiative explained that this year her goal is to bring science to all corners of the RM North area. In this opportunity, for the first time, a radio space called "The science of healthy living" will be developed, el cual está dirigido al público adulto mayor y será transmitido por el matinal de la Radio Cumbre 90.9 FM, there will be interviewed fortnightly to different specialists in health and healthy living issues, "the importance of this activity, is that virtual meeting will be generated, in which scientists will respond to the concerns of listeners immediately and with a language close". Monica also commented that radio programs, will be adapted and published on Explora RM Norte's YouTube and Spotify channel.

From today the call is open, aimed at researchers/ras and scientific disseminators/ras of the natural sciences, Exact, social, in art and humanities and technology to participate in educational talks. Enter here for more information.

On the other hand, Paula Meriño, Coordinator of Public Science of the RM North, explained that the conversations are free activities that will be broadcast on the Facebook and channel Youtube of the RM North. Then, the topics to be covered: 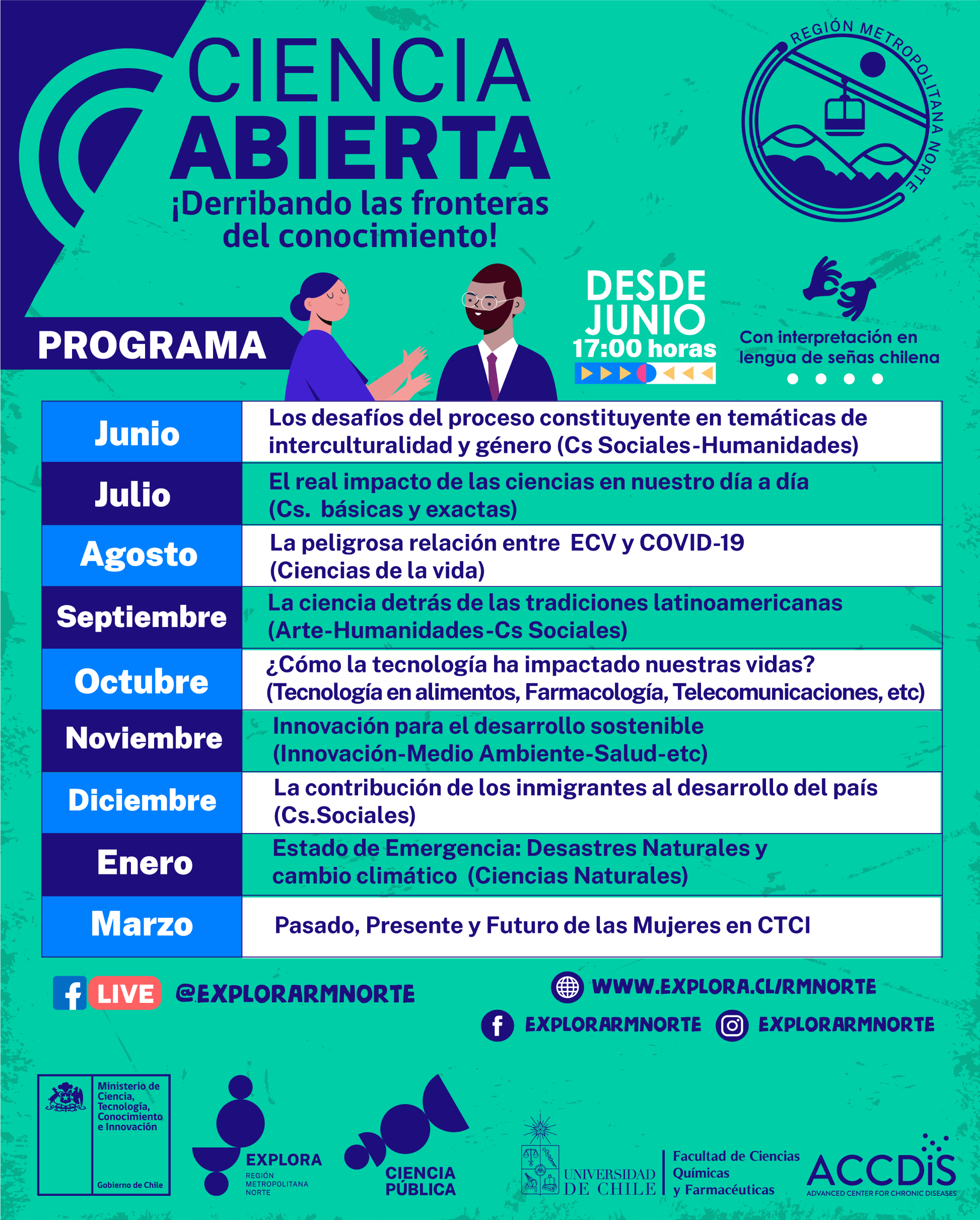 Regarding the educational talks, Paula invited the school community to stay tuned to the Project's website and social media, since in this way they will announce the opening of the registrations so that the schools request and register in the talks of their interest.

To end the Paula informed that there will also be a Seminar called "Disseminators in Action", which aims to serve as a virtual training for specialists in the various areas of human knowledge who are interested in scientific dissemination, "We hope to provide tools that allow them to improve their communication skills and raise awareness of the importance of scientific dissemination in the development of a scientific culture- technological in the country" commented.

For more information visit their website www.exploa.cl/rmnorte or write to paulamerino@accdis.cl