Interview Dr. Sergio Lavandero: "The way of the Chilean science for understanding Autophagy"

The concept of Autophagy has been taking a substantive relevance in recent years, more still, During this 2016, When the Nobel Prize in medicine, It fell to the Japanese scientist Yoshinori Ohsumi (Fukuoka, 1945), awarded for his contributions to the molecular mechanisms that regulate this process.

Hundreds of scientists around the world were pleasantly surprised by the news of the Nobel Prize in medicine 2016, which generates great interest for this physiological mechanism. Producing an impact in the scientific community, which –more and more– It includes researchers who are committed to study the Autophagy. 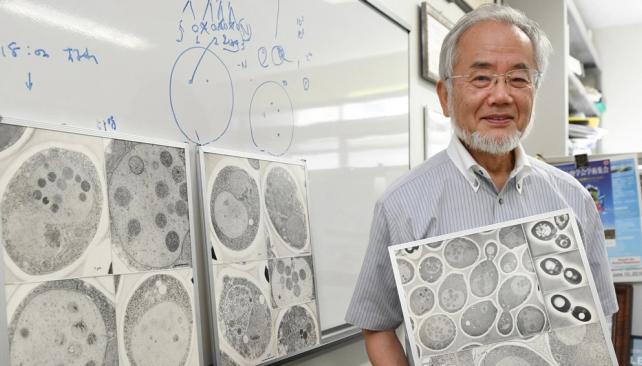 In our country - and since 2002 - Dr. Sergio Lavandero, Director of the Advanced Center for Chronic Diseases (ACCDiS ) -National Excellence Center formed by the University of Chile and the Pontifical University Catholic of Chile with the support of program FONDAP of CONICYT, and it is intended to identify the common elements of cardiovascular diseases and cancer, to offer alternatives for prevention or control of damage caused by them in our population - has done enough research on Autophagy, by which, This milestone, It marks the beginning of a new and promising era of research. Since, in the words of different media, and the scientific community, "the discoveries of Ohsumi led to a new paradigm in our understanding of how the cell recycles its content". 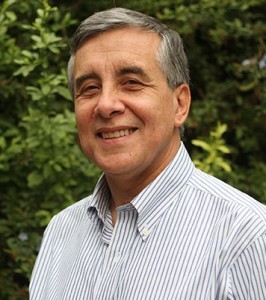 Dr. Sergio Lavandero is a prominent Chilean scientist, recognized for its high quality research and effective productivity. What is summarized, in 218 publications to his credit, being cited in more than 11.027 times according to Google Scholar, What is considered important in any field of science. He has 42 publications in the area of Autophagy, central topic of this chronicle.

Currently it is Titular professor of the Faculty of chemical and pharmaceutical sciences, and the Faculty of medicine, University of Chile. He is also adjunct professor in the Division of Cardiology, University of Texas Southwestern Medical Center (Dallas, Texas). During his career, Dr. Lavandero was Chairman and member of the upper Council of science of Fondecyt, President of the Chilean society of Biochemistry and Molecular Biology and member of the Council for evaluation and Vice-Rector of research of the University of Chile. The Prof. Laundry is also member of the Chilean Academy of Sciences.

It integrates the editorial boards of the journals Circulation, American Journal of Physiology-Endocrinology & Metabolism, Cell Death & Diseases and BBA Molecular Basis of Diseases, He has also been revising ad hoc prestigious international magazines and national and international agencies that support scientific research.

Then, the interview that the biology society of Chile, made to Dr. Sergio Lavandero.

What is meant by Autophagy?

Autophagy is a mechanism of cell degradation that allows the removal of proteins and organelles both normal and altered. The name Autophagy (Etymologically it means "eat yourself") and it was coined by the prize Nobel Dr. Christian de Duve (1974).

Basal Autophagy is a homeostatic mechanism for cleaning and recycling that operates inside all our cells. However, It can enable or inhibit above this baseline level in response to different stress conditions. Autophagy is a scheduled process, sequential and dynamic, characterized by the presence of vacuoles in double membranes in the cell cytoplasm.

How has the history of Autophagy developed?

It began in 1955 with the discovery of Lysosomes by Dr. Christian de Duve, and his subsequent description of "autophagic vacuoles" in 1963. Then, was established that fasting induces Autophagy in the liver and that both the deprivation of amino acid and glucagon, they are responsible for the aforementioned effect primary signals. After this stage, Initially, descriptive and morphological, was still a long period of silence, until in 1980, began to understand the molecular mechanisms of how they form and end the autophagic vacuoles.

Was established that the Autophagy is a process very dynamic that is can be subdivided in four stages: initiation, elongation, closure and merger, and finally, degradation. At the same time, as the vacuole is formed (autofagosoma), you are capturing the material to degrade. The process continues to the autofagolisoma formation (or also known as autolisosoma), fusion of the autofagosoma with a lysosome, compartment running the degradation due to the action of Lysosomal enzymes and acid pH (see Figure 1).

The silent work of Dr. Otsumi, reviewing the process autophagic in yeast, It was key to identify and characterize proteins ATG involved and regulate the four key stages. Through mutants of yeast, Dr. Otsumi discovered the basic genes that code for these essential of the autophagic process regulatory proteins. Dr. Otsumi also had another merit, through these works in Autophagy, trained generations of young outstanding Japanese scientists who have continued their legacy.

How have these investigations contributed to a greater knowledge and potential applications?

The team of Japanese scientists, led by Dr. Ohsumi created a transgenic mouse "Autophagy sensor" that expresses a protein formed by the protein Atg8 artificial recombinant (or LC3) attached to the protein fluorescent green (GFP)in all of your cells. The fast up to 48 h of these animals increased the increase in number of vacuoles autophagic LC3-GFP positive in various organs (liver, Kidney, heart, diaphragm, skeletal muscles, etc.) in relation to its controls, reaching Maxima at different magnitudes to 24 or 48 hours post-ayuno. Surprisingly, both the heart and some muscles were the organs that more experienced Autophagy. Then these researchers asked when we experience the maximum physiological fast? This question, is answered by analyzing the Autophagy before and during childbirth, as well as during the first hours post-nacimiento in various tissues of mice which over - express LC3-GFP protein.

Before birth, all requirements are provided by the mother to the fetus through the umbilical cord. However, This situation changed abruptly when the cord is cut at the time of the birth. In addition, normally the newly born not receiving breastmilk until after 24 or 48 hours after the birth. Our fat reserves are not exactly abundant, by what was the enigma of how we survived this critical stage of nutritional stress?

In this way, Dres. Otsumi and Nizushima discovered that the heart and various skeletal muscles experience a transient and intense activation of the process Autophagy providing energy substrates to the newborn (Nature. 2004; 432:1032-6).

It deregulates the Autophagy?

If by the way. Both the overactivation and absence of Autophagy is associated with the development of various pathologies such as cancer, neurodegenerative diseases, Diseases Cardiovascular, among others. In the case of the infarct of the myocardium, cardiomyocytes undergo severe nutritional stress due to ischemia (lack of blood supply) generated by an atherosclerotic plaque or a thrombus. In this case, Autophagy is activated and serves a protective function, providing power to those cardiomyocytes under stress. If genetic or pharmacologically blocks activation of Autophagy, Cardiac function is impaired. On the other hand, hypertension is a disease that affects 30% of Chileans and to get older its prevalence increases significantly. Today, we know that Autophagy is activated in the heart of the hypertensive. In this case your activation is harmful and half the pathological process. In this scenario, its genetic or pharmacological blockade prevents the deterioration of cardiac contractile function. Today, We know that Autophagy has a dual behaviour. Janus in Roman mythology, God of doors, the beginning and the end, a God depicted with two faces.

Several, but by far, rapamicinaes is the best-known. This drug immunosuppressive generated as a product of the bacterium Streptomyceshygroscopicus, discovered in 1965 in a sample of soil of Easter Island (“Rapa Nui”), It is an activator of Autophagy by inhibiting a component of the complex mTORC1. This complex has specific protein kinase activity, so its action is explained by the phosphorylation of specific proteins ATG and its corresponding inhibition. Both rapamycin and deprivation of amino acids, they share the mechanism of action in relation to Autophagy. On the other hand, chloroquine, antimalarial drug, It is an inhibitor of Autophagy by blocking the final stage of the process. However, There is a long list of other known chemical compounds and others under development that regulate positive or negatively the autophagic process.

What research does ACCDiS in Autophagy?

ACCDiS investigates two chronic diseases: cancer and cardiovascular diseases. Both are diseases of greatest relevance in Chile by their morbidity and mortality. In fact realize almost 60% of total mortality in Chile. In the interior of the Centre, There is a large group of scientists working on the theme of Autophagy and its link with the genesis and development of the above mentioned diseases. One of these researchers, is Dr. Alfredo Criollo, research associate ACCDiS and academic in the Faculty of Dentistry of the University of Chile.

Dr. Creole has 36 publications on this topic, in high impact journals. It was formed in this area along with the Dres. Guido Kroemer (France) and Joseph Hill (USA). Dr. Creole is organizing the Workshop ICGEB “Autophagy: "Physiological and Pathological Roles" to be held between 23-24 November, 2016 in the Aula Magna of the Faculty of chemical sciences & Pharmaceutical, University of Chile.

On the other hand, There is an obvious interest of the subject of Autophagy in Chile, reflected in the number of researchers with original research lines in Autophagy in Santiago and throughout our country. 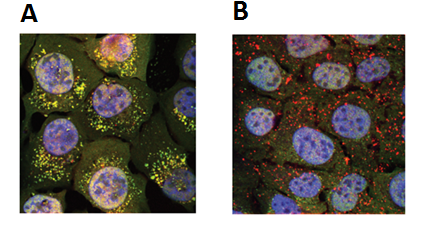 Figure 1. Time course of Autophagy in cells of bone cancer (U2OS). The photographs correspond to U2OS cells transfected with the plasmid RFP-GFP-LC3 and exposed to nutritional stress to evaluate flow autophagic. Panels A and B show the presence of vacuoles in yellow and Red, which correspond to autofagosomas and autolysosomes, respectively. Photographs of the laboratory of the Dr. Alfredo Criollo.