The meeting, organized by the Central Office of ACCDiS, was held on Monday, January 08, 2018, in the center of events "Open space", and had 123 attendees, disaggregated in principal investigators, partners and collaborators of the Center, along with pre and post graduate students and postdoctoral researchers. In contrast to previous years, the meeting focused on assessing current objectives and propose a new course (If necessary) for each line of research in relation to the renovation of the Centre, making attendees participate with your comments and suggestions, in order to improve ACCDiS in different areas.

The day consisted of a welcome from the Director of the Centre, Dr. Sergio Lavandero, followed by 15 minute presentations of the lines of research of each principal investigator of the Center, as also the MAUCO project, to inform attendees about new knowledge developed and its general projection over the next 5 years. The session was moderated by associate researcher Dr. Gareth Owen.

Subsequently, DRA. Sandra Cortés, research associate of the Center, He made the talk "Relevancy of the Natural history of the disease and its potential" to join teams, giving way to a group work on basic research, Clinical and public health ACCDiS in order to involve the members of the Center in the renewal process.

Group work consisted of forming groups of ten people according to their interests and/or work in the areas of cancer or cardiovascular and discuss three questions given in the previous talk for a time of 75 minutes. A person in charge of each area (Cardiovascular: DRA. Claudia Bambs - Cancer: DRA. Lisette Leyton, both research partners of the Center) the main ideas collected and reported the General conclusions of each area, that were exposed and discussed in a plenary session.

The main conclusions of the Conference were aimed at the objective of consolidating the Centre ACCDiS as reference in the study of chronic diseases at national and international level, This can work as a partner against political, ISP, INTA and other institutions of interest, In addition to influencing the generation of public policies, as well as collaborating in the future Ministry of science. The main thing is to disseminate the results and promotion of the work done at the national level, in order to generate confidence in the Chilean science. 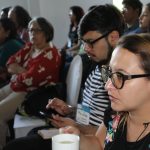