The contest "Chile Chile sequence" allowed 86 students sequence the genome of a piglet of Earth, In addition to being the co-authors of the paper that will be published with the results. 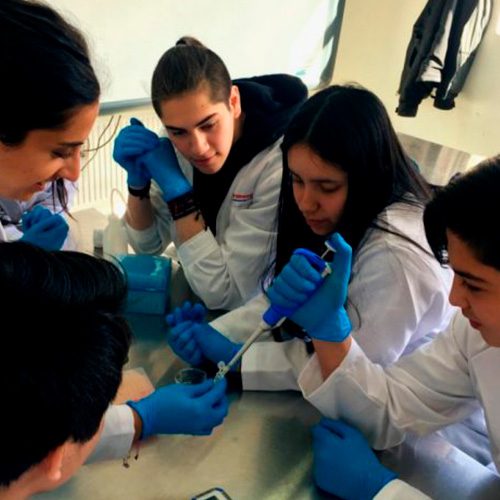 In the middle of last year, nearly a hundred students came through streets and gardens around the country with a mission: find a piglet of Earth. The objective was to sequence its genome for the first time in a classroom. The proposal, New in the world, was part of the school contest "Chile Chile sequence", organized by the project 1000 Genomes, an initiative led by the biologist Miguel Allende, seeking sequence, between now and 2022, the genomes of thousand Chileans and thousand non-human species, as animals, plants and microorganisms. All that to create a kind of digital Noah's Ark, that will serve as a free library for all researchers who have questions to ask genes.

To carry out the activity, were selected to ten teams from schools from across the country - among 65 candidates-, each composed between three and ten members, from second to 12th grade. In total, 86 participants, of which more than half were women students. In this way, was that students interested in science to understand better what Genomics is, a technology which in recent years has become increasingly more accessible, to the point that it is possible to practice it out of Labs. "There is no longer a prohibitive cost or methodology issue", says Miguel Allende, also director of the Fondap of regulation of the genome Center. "Soon, in any part of the world is going to start sequencing not only agencies but to people and, Therefore, It is important to educate about what means".

Selected schools for sequencing to the piggy of Earth - five municipal, three subsidized and two individuals - were the Toconao educational complex of Antofagasta; The Amazing Grace English School of La Serena; Commercial maritime Pacific Southern Institute of San Antonio; the National Institute; Colegio La Girouette; the Liceo San Agustín de Concepción; the Victoria Institute school; the school of excellence Altamira of Panguipulli; the College Cahuala island of Chiloé and the high school of the Mackay of Coyhaique.

Once each team collected its piggy of Earth, scientifically known as Armadillidium, they were classified according to their species - had five different - and the researchers of 1000 Genomes prepared DNA samples. August 23 was the day chosen for the sequencing of this isopod crustacean, whose genome is nearly as complex as ours. Great teams are not needed, but a device called a MinION, Oxford Nanopore Technologies firm, measuring just 10 cm, It weighs less than 90 grams and has USB connection, so young people could see the process in real time.

During the activity, each team had two PhD students Guide, belonging to the research centers that participate in the project 1000 Genomes: the Fondap of regulation of the genome centres; of Gerociencia, Health and metabolism (GERO); and Advanced chronic disease (ACCDIS). The Millennium Institute for Integrative Biology and the Basal Center of mathematical modeling also participate.

While sequencing data were generated on the screen, young received workshops about the secrets of the DNA: they learned about what are the best strategies to read it correctly, How to sequence it and the various ways in which this determines the characteristics of all living things. The next day, When were the results of the five different species ready, they were shared in a ceremony led by Miguel Allende, that was transmitted by streaming in all schools. "It's an innovative idea at the national level which will give the kick-off for following projects", says Ricardo Torres, student at the Cahuala School of Castro and participant in the initiative. "I feel super good this is practiced at the school level and I feel privileged, because it is an experience that will be significant for my professional future".

The students used devices MinION, Some portable sequencers that barely weighs 90 grams and have USB connection.

Currently, the team of scientists from 1000 Genomes is making new rounds of sequencing to finish assembling the genome of the piggy's land and be able to publish all their data in publicly accessible databases. In addition, they are writing a paper with the results of the investigation, to be published in Biological Research, the official magazine of the biology society of Chile. Sequencers youngsters will appear as co-authors. "The paper It will focus on what it means to people who have no scientific preparation can generate original data", says Miguel Allende, Project Director. "Today, Thanks to simple technologies, they are in position to do Genomics advanced". During the process, teachers stressed the impact that meant for students, many of them in regions remote from the main scientific focuses of the country. Mabel Codocedo, Professor of the complex educational Toconao from San Pedro de Atacama, He pointed out that the initiative prompted them to continue participating in scientific activities. "It serves to develop another type of reasoning, to be more critical and, excited about science, opt for this type of racing", added. His students, They said several teachers, they are part of a generation that will continue to discover the potential of genetics and, at the same time, You must resolve the ethical dilemmas involving, especially in the area of health.

For the next edition of the contest "Chile sequence Chile" - whose application period will remain open until Monday, July 1, through the page 1000 Genomes-chose another group of insects present throughout the country, whose genome is also unknown: the dermapteros, popularly known as "Earwigs". It will be another opportunity for young Chileans to discover that genetics and its secrets are increasingly close to us. Summarizes it the molecular biologist Miguel Allende: "Perhaps our greatest achievement was the students realize that DNA is microscopic, unfathomable and mysterious, but we can now look at it with all the detail that we like".