The plan is so ambitious, that was compared with that led to the man to the Moon. But, What is so close to the medicine to find the cure for a disease that is the leading cause of death in Chile in a couple of years??

Last may, the Vice President of USA, Joe Biden perdió a su hijo de 46 años por un tumor cerebral. Since then, Biden has made fighting the disease a personal cause.

That it was not coincidence that President Barack Obama entrusted him to lead the national campaign more ambitious than us. UU. It has launched against cancer.

In his speech of the State of the Union, Obama announced a "new national campaign" to end cancer, initiative that will increase the resources public and private to fight against the disease. "Do to us." UU. is the country that cures cancer once for all", challenged Obama in his speech at the Congress.

The idea is to double the pace of progress. "Do in five years the advances that we would do in a decade", said Binden.

The effort was even compared to Kennedy plans to reach the Moon. "This is our launch to the Moon", said the Vice President.

The crusade is so noble as ambitious, but do materializable?

In all case, Quest highlights that Yes has been some advances and several cancers that before not had treatment today it have and allow a greater survival of the patients. Why not is has got a cure?? For several reasons it says, but mainly because although all are called cancer, each type is in itself same a disease different. "Cancers have things in common such as growth and abnormal cell proliferation and metastasis, "but are all different", says.

To that is added the fact that even though it is the same cancer that attacks for the second time to a patient, the body responds in way different to the treatment. "Are many cells within a same tumor, non-homogeneous populations, have features different. Then, a treatment can eliminate much of the tumor cells, but not all", explains Quest.

The treatment more old, that began to supply it to purposes of the century XIX, is the surgical: remove the tumor. Later radiotherapy was developed, then chemotherapy, and hormone therapy, It aims to provoke the death of tumor cells long term creating an unfavorable hormonal environment.

One of the new techniques developed is immunotherapy, that seeks to "mobilize" the defenses immune of the patient against his own disease. According to some researchers, it could transform the treatment of some forms of cancer. Already there are encouraging results in the treatment of the melanoma advanced and of certain types of cancer of lung.

Another promising track are specific treatments against certain molecules that participate in the growth of evil. It is used in certain cases of blood cancer, but also of mama, Lung and digestive system.

In still-experimental status, gene therapy also added bonuses. Consists in "inject" a gene to a cell, to replace a gene poor or to induce the manufacture of a substance intended to destroy them cells cancer. It has shown effective in children that suffer from cancer of blood. Also it is testing against the cancer of pancreas.

Despite the progress, Flavio Salazar, Deputy Director of Millennium Institute of Immunology and immunotherapy (IMII) is skeptical. According to the, a world without cancer is very difficult, and not only because each cancer is actually a distinct disease, but because in addition, the causes for the abnormal proliferation of cells that occurs, they are different." There are environmental factors, genetic, of the metabolic balance of the body which make it difficult to prevent disease. In addition, tumor cells are so similar to the normal ones that destroy them without affecting healthy cells, It is also difficult", designates.

"Get a cure for all cancers is how to get a cure for death: is very little likely. That it can be done, It is mitigating and finding solutions for cases that were previously incurable, "so it can treat as diseases chronic". 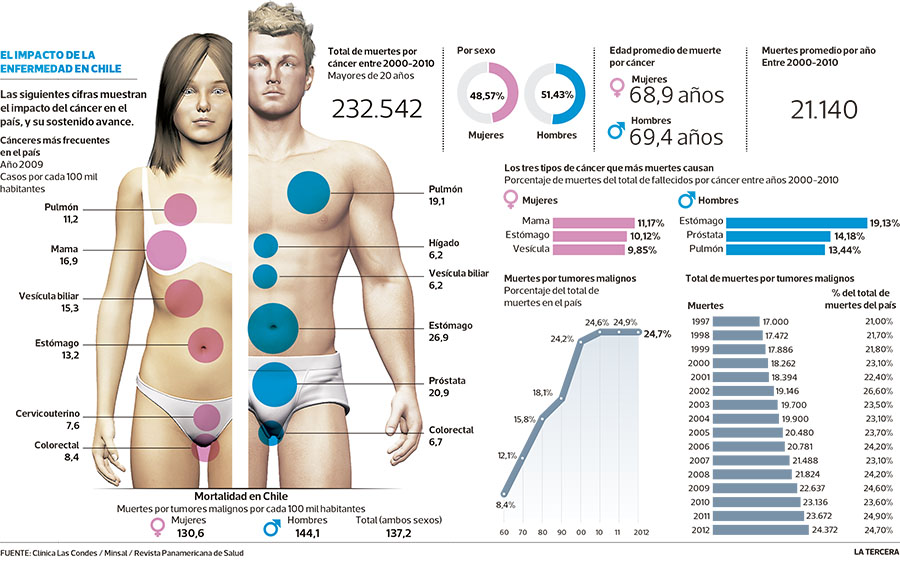 Despite the escpeticismo, already there are several cancers in that is can speak of cure, as the testicular, lymphoma and leukemia of Hodgkin, This last that at least is developed in a disease manageable.