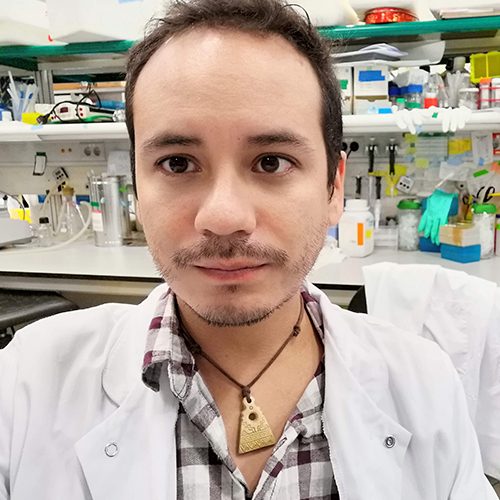 A new episode in the remarkable career of Roberto Bravo-Sagua is brewing right now, in the city of Barcelona, Spain.

There, the PhD in Biochemistry from the School of chemical sciences and pharmaceutical of the University of Chile is doing an internship in the Institute for Research in Biomedicine (IRB) together with Antonio Zorzano, Professor of the University of Barcelona "and an eminence in the field of cellular metabolism and communication between organelles", clarifies Bravo-Sagua.

But what were the reasons that led to Bravo-Sagua to the IRB for its internship? "In the first place, I want to contribute with publications of this laboratory. As I am a researcher with some experience, I can make important contributions. Doctor Zorzano publishes high-quality articles, so this opportunity will help me to improve my resume, It is essential for the demanding are contests of scientific projects", designates.

Bravo-Sagua adds that "the research requires much creativity, time to incubate ideas and be exposed to new experiences. In Santiago, many times the work can be stressful, and change of scenery is necessary from time to time. I think that the relaxation, Leisure and the mental health care are extremely important, "despite the fact that many times are understated and even stigmatized as laziness".

The sojourn of Roberto Bravo Sagua in Spain was conceived thanks to a Scholarship Santander universities. This grant is awarded to students and young academics to carry out internships in Ibero-American countries. "I got this award thanks to the excellence of my career, and I decided to use it to come to Spain, because of the high scientific level which have here, and, Of course, see especially to Dr. Zorzano", account.

The internship will last for 3 months, and its goal is to study how cell organelles contribute to the regulation of energy metabolism.

"This opportunity will allow me to grow as a scientist at a key stage of my career, It's my first steps as independent researcher. In addition it will allow me to strengthen the collaboration with the research group of Dr. Zorzano, and so, contribute to the excellence of ACCDiS as chronic diseases research center, from the point of view of aging", says Bravo-Sagua.

In this new stage of his career, the center of the work done by the researcher is aging. "Given my expertise in metabolism at the cellular and molecular level, I started a collaboration with the Group of geriatric epidemiology of the INTA. This transdisciplinary work, called VINTAGE - vitality and intellect associated with geriatric- It seeks to evaluate how energy cell metabolism is associated with good quality of aging. This good quality of aging depends on many factors - physical environment, social, lifestyle and genetics- that affect us during the entire course of life", highlights.

In both, the doctor in biochemistry indicates that his work is also being generated in the interaction between three-axis: networks of cell organelles, energy metabolism and aging. "With respect to the first two, I've been more than a decade studying how communication between organelles regulates the energy metabolism of the cells, allowing them to adapt to adverse conditions. In ACCDiS, as a student of postgraduate and postdoctoral, I devoted myself to study how this communication is altered in chronic diseases. Cancer and obesity we find alterations at the level of cell metabolism", comments.

The work done by Roberto Bravo-Sagua on this issue was, precisely, that made him creditor of the first place in the category researcher Joven in the sixth version of the University scientific research award, organized jointly by Banco Santander and El Mercurio, He recognized the best works in the area of "Ageing in the Chilean population", focused on promoting, Prevention and intervention of health at the community level, regional, national or international.

About this work - entitled "Association between cellular energy metabolism and quality of aging in older adults" -, Bravo-Sagua says that "when it comes to old age - word that possesses a great stigma that, by the way, have to get it off- a person can become one robust elderly person, which means to adapt to the adverse conditions, or fragile, which means that you one is prone to bad health".

When asked about the challenges facing future, Bravo-Sagua is emphatic in pointing out that "the challenge is to raise a line of study as an independent researcher. One of the tools for this is the project's initiation in research, CONICYT, aimed at young researchers. It is my intention to consider how communication between organelles - mitochondria and endoplasmic reticulum- regulates the energy metabolism, and so, the process of aging at the molecular level", going beyond the epidemiological and my expertise, as a biochemist I am, the research at the molecular level is. "To be able to present this research is that I came of internship", completed.